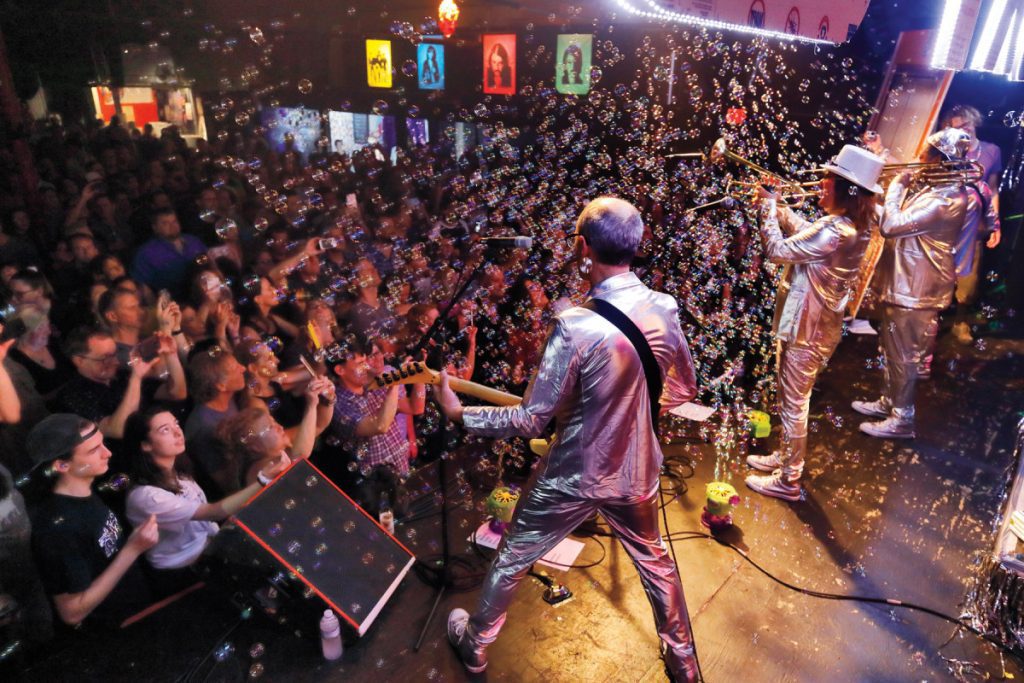 [How Raleigh, North Carolina Became a Hotbed of Independent Music]

In our new series, we look at eight cities where live music has exploded — from legendary hubs like Chicago and Nashville, to rising hot spots like Tulsa, Oklahoma, and Portland, Maine. The latest falls into the second category: the Raleigh/Durham/Chapel Hill “Triangle,” where college radio isn’t dead and collaboration is encouraged between artists, creating a sound you can’t find anywhere else.

Just a few months after they moved to Durham in 2013, Nick Sanborn and Amelia Meath of the electro-pop duo Sylvan Esso played their first-ever proper local show, at the Pinhook. “I thought maybe 30 friends would show up,” says Sanborn. But there were more people than that. One of the Raleigh/Durham/Chapel Hill area’s influential college radio stations had started playing the group’s “Hey Mami;” when Sylvan Esso took the stage, they saw a sold-out crowd of 250. “It was my first moment of ‘I can’t believe how cool this place is,’ ” Sanborn says. (Today, “Hey Mami” has been streamed nearly 30 million times, according to Alpha Data, the analytics company that powers the Rolling StoneChart.

The Triangle, as it’s called, has become a hotbed of independent music recently, with artists from across the country flocking to the area, driven by its cheap rents and ample service jobs. The influx has transformed a relatively insular scene into a thriving one. There’s dance music in Chapel Hill, hip-hop and Americana in Raleigh, and indie-rock in Durham. “Fifteen years ago, there were, like, six people here,” says singer-songwriter Tift Merritt. “Now, there’s a whole community.” “A lot of the same drivers of the music scene are still the same: great college radio, great record stores, college students,” adds Superchunk’s Mac McCaughan, who runs the Durham-based Merge Records. “[Now] the thing is, there are just so many great bands.”

Folk groups like Chapel Hill’s Mandolin Orange and Raleigh’s American Aquarium are long-standing local draws. The spirit of collaboration in the city’s fluid indie scene, meanwhile, has produced a score critical darlings like Hiss Golden Messenger, Mountain Goats, Sylvan Esso, bands that share members, tap into each other’s genres, and collaborate freely without worrying what it means for each other’s careers. “Pretentiousness is seen as a disease here,” says Sanborn. “I feel like I can kind of tell when something’s from North Carolina right now, just because it tends to include disparate elements you might not hear anywhere else.”

Country and folk no longer run the game: The area is now home to tons of hip-hop talent, including Rapsody (who guested on Kendrick Lamar’s To Pimp a Butterfly), Lord Fess and Young Bull. This boom is thanks in part to 9th Wonder, whose Raleigh-based Jamla Records has made the area a wellspring of nationally-recognized talent (The label teamed up with Roc Nation to sign Rapsody). The scene, says 9th Wonder, has become “so many kids doing their thing, too many to name. It’s grown tremendously.”

Visit the area in September, during Raleigh’s Hopscotch Music Festival, which features a mix of prominent local talent and major national acts such as Big Boi and St. Vincent. Then, stick around a week for the International Bluegrass Music Association’s yearly conference. If you’re coming in the Spring, check out local legend J.Cole’s Dreamville Festival, which featured SZA and 21 Savage in 2019.

The Cat’s Cradle, a divey two-floor venue less than a mile from the University of North Carolina Chapel Hill in nearby Carrboro, is beloved among road vets: “We’ve played, like, 15 times at the Cradle alone,” says Wye Oak’s Andy Stack, who recently moved to town with bandmate Jenn Wasner. Other mainstay local clubs include Motorco Music Hall and the Pinhook in Durham, which Sanborn described as “the epicenter” of his scene. “You get spoiled,” says BJ Barham of American Aquarium. “All my friends in New York and L.A. talk about how they get to see great shows every single night. The same could be argued with the Triangle.”