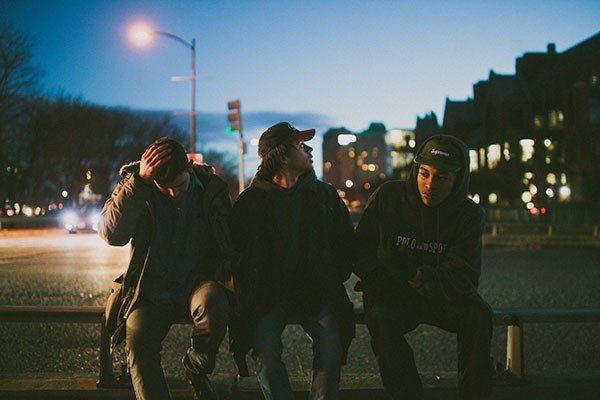 When Tahmique Cameron and Gabe Fox-Peck showed up to Durham School of the Arts’ spring talent show auditions in 2014each with his own prepared musical number the show’s coordinator informed them that there was only one slot left. Choose between yourselves or audition together as one act, he said. The two high school juniors, who knew each other casually from the JV basketball team, opted for the latter, singing John Legend’s “Ordinary People” with Fox-Peck playing accompaniment on the piano.

“That was the beginning,” Fox-Peck, now twenty-one, says. “We found that we had a good chemistry, and a few weeks later we recorded our first song, ‘Can’t Get You Outta My Head,’ in my bedroom after school.”

“Can’t Get You Outta My Head” is a laid-back number, featuring Cameron’s smooth, emotive voice over funky keyboards, steady tambourine, and sparkling synth. It epitomizes the sound that would go on to become Young Bullin the group’s own words, “distinctively Southern, fusing trap and old-school soul influences into an unmistakably electric aesthetic”showcasing Cameron’s background in church choir and Fox-Peck’s studies in jazz piano. Since then, Young Bull has established itself as one of Durham’s most promising young acts, energizing the hip-hop scene as they one-up themselves with each new song.

Cameron and Fox-Peck continued to put songs together post them on SoundCloud, with Cameron singing, Fox-Peck producing, and each writing songs. They took on the title Young Bull, a name Cameron says was given to them by their friends.

“We’re young and from the bull,” Cameron explains, referring to Durham’s Bull City nickname. “For a while, we were really thinking of changing it, because we ain’t gonna be young forever, but then we just decided that we represent our youth. The youth lives in us forever.”

During the summer of 2016, as Cameron and Fox-Peck were finishing up their first album, Sopadelic, they received a message from Christian Sinclair, a Winston-Salem based rapper and singer interested in collaborating with Young Bull. They sent Sinclair a track called “Quiet” and within the day, he wrote an accompanying verse, recorded himself in his dorm room at N.C. State, and sent it back. They loved it, and Sinclair officially joined the fold shortly after.

“Christian brought rap, and an energetic, bouncy sound,” Fox-Peck says. “He gave some of the songs a different vibe and completed the circle of emotional expression.”

In parallel with his vocals, Sinclair brings a positive spirit and high aspirations to Young Bull.

“We’ll be one of the bigger groups in the country for sure,” Sinclair, twenty-three, says. “I want to go global with our sound and represent American hip-hop and R&B in a new way.”

As Young Bull developed their signature sound, they also refined their lyrics to better convey the sentiment they hope to leave with listeners.

“We’re all writers, and we’ve gotten better at saying what we’re trying to say,” Fox-Peck says. “We want to give an everyday voice to something that people can relate to, but not cliché-sounding. We want to sound like you’re in the same room as us when we’re talking.”

Through years of hard work, Young Bull has transformed a few casual SoundCloud uploads into two albums and multiple singles with millions of plays on music streaming services, leading them to gigs at clubs and colleges, spots at music festivals like Hopscotch, Art of Cool, and this weekend’s Beats N Bars Festival, as well as critical acclaim. Their general success is impressive, given that Cameron, Fox-Peck, and Sinclair currently live hours away from each other, in Durham, Boston, and New York City.

Fox-Peck attends Harvard University and schedules all his classes on one day so he can devote the rest of the week to making music and performing. They use FaceTime and voice memos for long-distance collaboration and endeavor to book shows that fit with each other’s schedules.

“We’re constantly making things work, but we’ve had to miss funerals and all types of things,” Cameron says. “[Young Bull] is our number one priority.”

“Even when we’re not in Durham, it still lives through us,” Fox-Peck says. “I think especially with so many artists who are from big cities like New York or Chicago, the fact that we have a local city that’s a dope place with a unique character sets us apart and adds to who we are.”

The city’s abundant creative energy also makes it easy for the band to work closely with other local artists and businesses, which they’re eager to do. The band recently teamed up with the streetwear brand Runaway for an event; both sides reap the rewards from helping each other get a leg up.

Whether it’s fusing musical genres, finding new fans across social media and streaming platforms, or collaborating with other artists, creative cross-pollination has proven to be Young Bull’s secret weapon. The band has its finger on the pulse of not just the music industry, but the entire aesthetic of what young people are into. They’re trendsetters with the talent to back it up, paving the way for Durham’s talent to come.