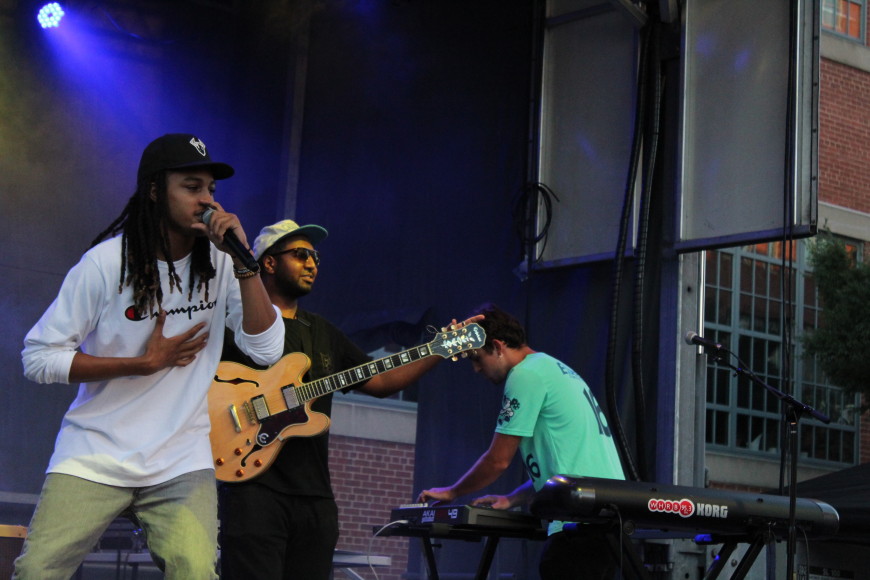 The first symphony by Wolfgang Amadeus Mozart was written when the composer was just eight years old. The German composer Frederic Chopin delivered his first piece at age seven. Juicy J’s first rap? Three years old (I have this on good authority).

As you are probably aware, these well-known cases of precocious childhood virtuosity are aberrations in the context of all professional musicians, most of whom were still learning the concept of “sharing is caring” at age seven, let alone creating multi-instrumental arrangements out of thin air. For the most part, these things (“these things” being long, successful, enriching musical careers) take time.

So perhaps some forgiveness can be granted to any Triangle music enthusiasts (including yours truly) who thought that, a mere year or two removed from high school, the promising hip-hop/soul/jazz/everything outfit Young Bull would deftly finesse their way around any and all of the numerous pitfalls that laid underfoot for a band of their years, burning a white-hot, linear trajectory of fire straight into the music industry solar system and reincarnating the ghost of pre-neck tats Vic Mensa to become Durham’s version of Kids These Days.

In hindsight, we (I) may have gotten a bit ahead of ourselves (myself).

Not because Young Bull isn’t a very talented group. Not because lead singer Tahmique Cameron isn’t a great singer, or because Gabe Fox-Peck isn’t as capable a young producer as I’ve heard. Not because they aren’t the single most exciting new act to come out of the city I live in since I’ve been here (not counting GYMZWA because he lives in LA). Because they are. No, it’s because young people — as anyone who has ever been 18, or 19, or 20, can attest — are known to make a misstep here and there. And this EP, although in some ways an impressive follow-up to last year’s out-of-nowhere revelation Sopadelic, has its own share of them.

You’d never know it though, not from how immaculately the album begins. In a fog of ethereal, hypnotic sounds that sound like the next chapter of a journey taking shape, a man at a music venue, clearly the MC for an out-of-town tour date, welcomes Young Bull to the stage. The studio track starts to consume everything, and as the cheers of the crowd fade to black, a voice emerges to ask a question…

“I ask a shooting star, could you make a superstar?”

The transition from skit to song is seamless. It’s the kind of nondescript detail that on a major label release would barely raise an eyebrow, but on an even semi-local level, feels like splitting the atom. This is how Young Bull tricks you into thinking they are infallible, even though they were at Durham School of the Arts more recently than you were in college.

As the album’s opening track, “We Up,” builds with the help of smooth, engaging verses from rapper Christian Sinclair that trade places with infectious, irreverent party-singing from vocalist Tahmique Cameron, an early mythology around the album begins to take shape: If Sopadelic was a few raw, scrappy kids sneaking a foot in the door, Midnight Sun is going to be that group stepping back, charging the door, and emphatically putting their foot through it. This will be the year of Young Bull. But seriously, what if 2018 is the Year of the Bull — has anyone seen the upcoming Chinese calendar? This is starting to feel cosmic.

But wait, don’t get carried away.

Because like a transcendent athlete batting or shooting with his wrong hand for the sake of sport, Young Bull seem fixated on the very material that, as a fledgling act, is predictably the most difficult for them (or really anyone) to execute well. Fun raps and hooks on topics ranging from growing up, to hating Donald Trump, to wondering if a particular girl likes your songs — you’d expect this to be the bread and butter of a group like Young Bull, and it is. When they go for it, the result is almost always a slam dunk. As much fun as dunking a basketball might be (I wouldn’t know), Young Bull seems to understand that they can make fun, lively songs at the drop of a hat, and their artistic choices on Midnight Sun suggest they aspire to do more. It’s an admirable tact, but one that the project as a whole pays a price for in the end.

After “We Up,” and the skit that follows, it feels as though the brakes get thrown on everything, and we never really get back to cruising speed again (with the exception of the trappy, radio-inflected “I Love My”). The buttery-smooth, molasses-thick love song “Chocolate,” helmed by Cameron, is perfectly suited for his voice, and he shines. Sinclair — smartly added to the group full-time after being a sneaky-good X-factor on Sopadelic — contributes a sharp, melodic verse, but it gets tucked in the middle, easy to miss in the sea of Cameron’s singing.

In the songs that follow, from “Sorry,” to “Lie To Me,” to the closer, “Take Ya Load Off,” the slow pace rarely shifts, and the understated yet attention-demanding energy from “We Up” never returns. Make no mistake: even when YB pumps the brakes, it sounds good, and no one could call 28 minutes with Midnight Sun an abrasive or unpleasant listen. Nor could you call Midnight Sun a case of treading water, as the group’s musical growth from their debut album is evident, even in its less engaging moments. But it still doesn’t scrape the surface of what this group is capable of.

Midnight Sun is an EP by a group of young artists, who may occasionally make some young decisions, and who, as it so happens, go by the name Young Bull. It doesn’t massively outshine the group’s last outing, but still drops a couple major gems along the way (“We Up,” “Space”). Basically, it’s exactly what we should expect from a group of kids growing up, having fun, and figuring it out. No one wants to party with Mozart or Chopin anyway.